Ephesus, the capital of the ancient city of Anatolia, is an extremely splendid metropolis. This mega ancient city, whose unique architectural monuments have been standing for thousands of years, has entered the World Heritage List.

Based on Anatolia’s mother goddess (Kybele) tradition, the Temple of Artemis, one of the Seven Wonders of the ancient world, also increases the importance of Ephesus. The Ephesus Archaeological Site has symbols of high-level urbanization, architecture and religious history belonging to different civilizations, especially Hellenistic and Roman.

Ephesus, starting from the prehistoric times and throughout the Hellenistic, Roman, Byzantine (Eastern Roman), principalities and Ottoman period, was always inhabited and was a political and commercial center. Ephesus played an important role in science, culture and art throughout its history dating back to 7000 BC, and was one of the most important metropolises in the ancient world. It was a major gateway and a port city between East and West (Asia and Europe). It continued to evolve without losing its position.

The history of excavations in the ancient city, which hosts an average of 1.5 million visitors per year, is approaching 125 years. Ephesus, which has not yet been fully uncovered, continues to bring new dimensions to Anatolian archaeology.

It has two gates, called “down” and “up”, which are three kilometers away from each other. The most famous remains identified with Ephesus Archaeological Site is the ” The Library of Celcus “, which is breathtaking with its enormous columns. This library which dates back to the 2nd century, is one of the most important antique libraries in the ancient world ranked after Alexandria and Pergamon. 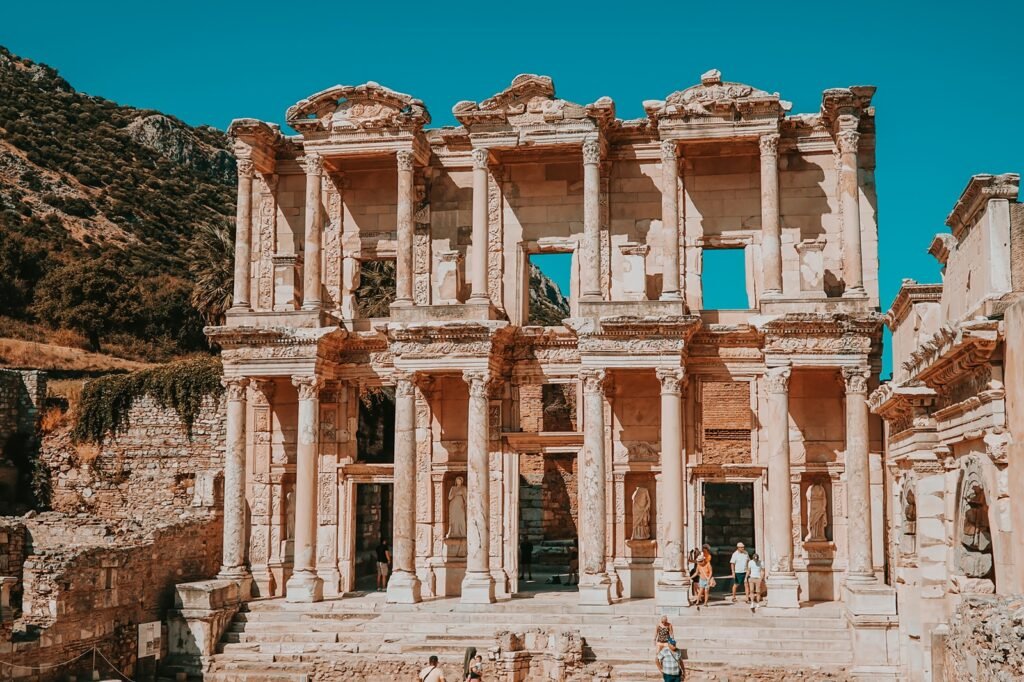 The Hadrian Gate and the Temple of Hadrian are among the prominent structures on Kuretler Street, built in the name of Emperor Hadrian. The other ruins worth seeing are; Artemision (The Temple of Artemis), one of the Seven Wonders of the ancient world, the big theatre with its 25,000-seating capacity, stadium, trade and state Agoras (market place), Prytaneum which has Temple of Hestia (Holy fire), 1,800-seating capacity Odeon (assembly hall and concert hall) and the ancient harbor

The famous Şirince village in the district of Selçuk, is worth seeing. As a result of Turkish-Greek population exchange in 1923, with the separation of the Greek population, it was given to Turkish exchange. Known for viticulture, winery and olive oil Şirince has gained a tourist identity since 1990s. In the village, which attracts attention with its architectural texture, Greek houses serve as bed and breakfast.

For more regions around the Aegean region visit:https://visit-turkey.org/destination/aegean-region/