The Cesme Peninsula, lapped by the waters of the Aegean Sea, lies west of Izmir province, in Turkey's Aegean region. "Cesme", meaning "fountain" in Turkish, derives from the many sources of water found in the area. It is one of Turkey's most beautiful stretches, surrounded by clear blue seas, with landscapes of cultivated fields of aniseed, sesame and artichokes dotted with fig and gum trees.

The district is famous for its deep blue sea, golden sands and gentle breeze along its peninsula. In the unspoiled bays you can swim in absolute peace. Visitors will find excellent holiday accommodations, restaurants and sports and entertainment facilities. The area is competing with Bodrum for its beaches and sea, as well as the nightlife and windsurfing, making it a popular holiday destination in Turkey.

It is possible also to get to the Greek island Chios (Sakiz) with regular daily ferries. Cesme has an international harbor linked to Izmir with a superb highway (80 kilometers – 50 miles).

Cesme was captured from the Byzantines by a Seljuk Turkish force under Çaka Bey in the 11th century AD. With the decline of the Seljuks in the 13th century, it became part of the Aydinogullari principality, which used Çesme as a naval base.

The sultan Yildirim Bayezit captured Çesme in the 14th century, but after his defeat against Tamerlane Ottomans lost the town, then it was returned to the Aydinogullari, and finally recaptured by Bayezit’s son Mehmed I in the 15th century.

A 14th-century Genoese fortress, restored and enlarged by the Ottomans in the 16th century, dominates the small port of Çesme and now houses a weapons and sea history museum. Today, the town is a popular holiday resort with good accommodations and restaurants. The 16th-century caravanserai near the fortress, Öküz Mehmet Pasa Kervansaray, built by Süleyman the Magnificent, has been converted into a hotel. It’s a solid stone building in good repair whose central courtyard is cool even in the hottest weather.

Before the rise of Izmir, Cesme was the region’s major port, and this caravanserai marked the end of the Silk Road for the caravans who plodded their weary way across Anatolia from Central Asia and the Middle East. Here the goods were unloaded from the camels for export to Europe by ship through the Aegean and Mediterranean. The Church of Agios Haralambos has been restored as an art gallery.

Thermal baths offer a health-centered escape from modern life. At night a lively, fun atmosphere pervades, especially in the restaurants, cafeterias, bars and discos along the promenade. A newly built modern marina has all the facilities for boat owners, as well as many fine restaurants and shops on the premises.

Yachts can be hired to explore the peninsula’s splendid coastline. Cesme hosts an annual International Song Contest in July, one of the most important festivals in Turkey. Cesme is also famous for its mastic flavored ice-cream and mouth-watering toasted sandwiches called “Kumru”.

Above all, it is Cesme’s beaches, the longest on the Aegean coast, and turquoise sea which brings holiday-makers back here again and again. 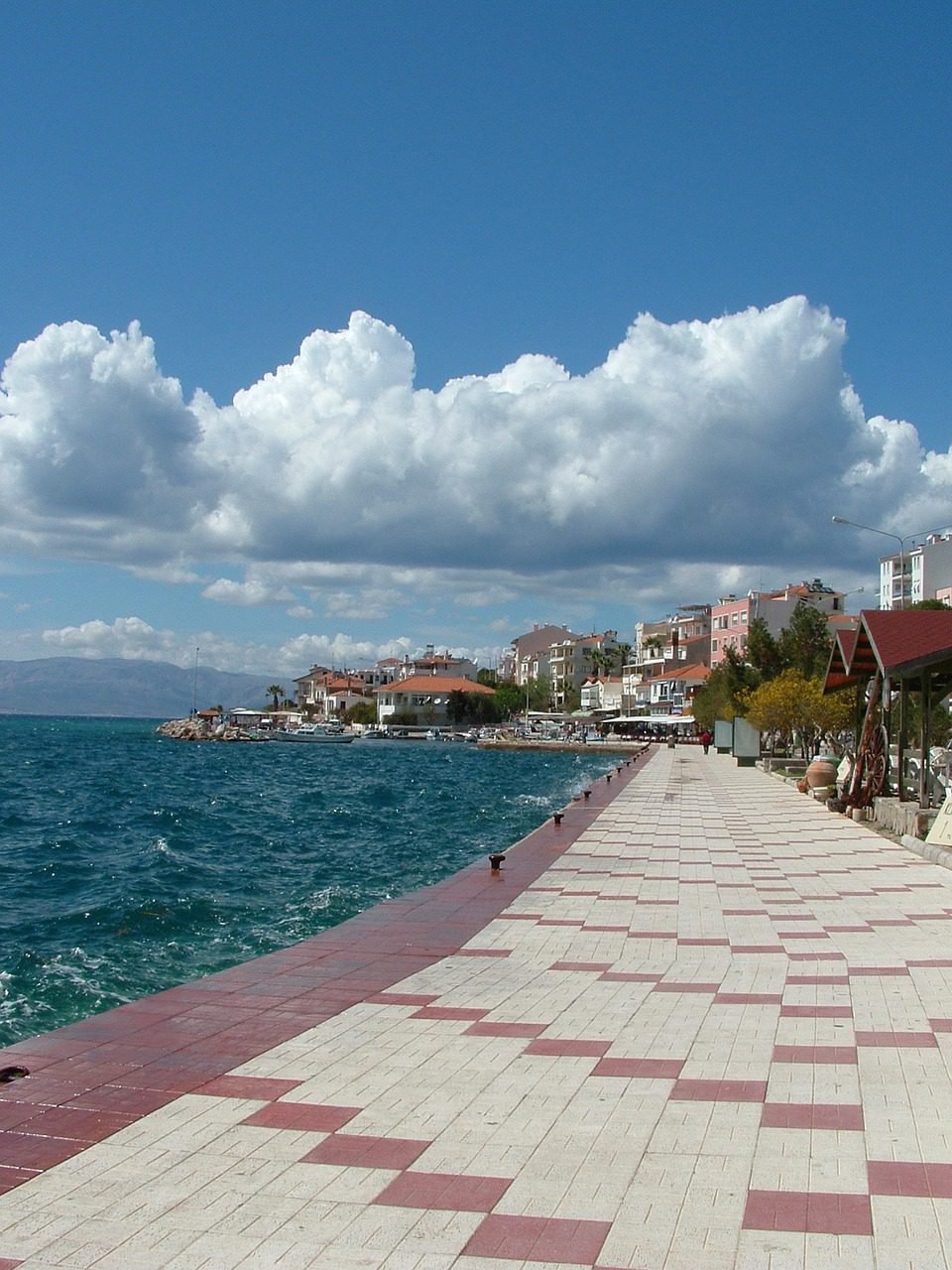 The very popular holiday center of Ilica boasts an excellent white sand beach and the facilities of the Altin Yunus Marina and many fine or regular hotels. The bay here is ideal for water sports, especially windsurfing and sailing. The thermal baths around Ilica are very popular; the best being located on Sifne Bay. In 146 AD the Greek geographer Pausanius described these mineral springs as the ‘sea springs’ and claimed that their therapeutic effects were superior to any other spa in Ionia.

They relieve rheumatism, inflammation of the joints, partial paralysis, digestive complaints, infections of the spine marrow, cardiovascular diseases and gout. Pasa Limani has a couple of nice beaches too. During summer on Ilica Bay, the colorful International Çakabey Optimist Yacht race is held.

Ildiri, a quiet seaside village 20 kilometers (12 miles) northeast of Cesme, was ancient Erythrai which emerges on the stage of history in 3000 BC. Excavations here have shown that the site has been settled since the early bronze age, and as a result, the area around the village of Ildiri has been declared a national heritage site.

The walls around the ancient city are still standing, and Hellenistic period floor mosaics of exceptional beauty can still be seen in one of the buildings. Excavations have also revealed a temple of Athena, theater, mausoleum and villas from Hellenistic and Roman periods. Statues, jewelry, and other finds from the city are exhibited in the Izmir Museum. Those who climb up to the Acropolis at dusk are rewarded with beautiful views as the sun sinks over the bay and islands.

Nearby is Gerence Gulf, a pristine inlet on the northeast Cesme peninsula that can be reached by yacht or car. The natural surroundings offer relaxation while the bay is ideal for water sports.

Dalyan, a fishing village, built on a sheltered deep water inlet just north of Cesme, has some of the region’s best fish restaurants which border the quay of the lively marina. During the summer days you can sunbathe and rest at its small beach and in the evening enjoy restaurants serving fresh fish and mezes.

Tourists are attracted by Çiftlik’s many accommodations and by a long, sandy beach (Pirlanta Plaji) just outside of town to the southwest. Camping facilities are available to the south and nearby stretches one of the area’s best beaches, the Altinkum Plaj (Golden Beach).

Windmills, some of which have been converted into attractive restaurants, dot the hill above Alaçati, a delightful and typical Aegean town. Alaçati lies to the south inland from Ilica and the coast, with several good beaches. Many lovely bays, accessible only by yacht, stretch along the coast southeast of the town and ensure peaceful and relaxing anchorages in this popular sailing region.

Çark Beach is a favorite with families with young children because the sea is shallow. Alacati became a popular town in the peninsula in the last 10-15 years. Many of its old stone houses in the town center have been renovated and converted into fine boutique hotels, restaurants, or shops. The interior of these stone houses are remarkably cool in the summer months. In many of the cafeterias, you can try Turkish coffee with mastic, or eat a mastic cookie or a milk pudding with mastic in it at the pastry shops.

Alacati has a typical market with fresh food and vegetables. Not to miss also the Herb Festival organized once a year. There is a modern marina in Alacati with several good restaurants, bars and discos. Known in ancient times as Clazomenae, Urla Iskelesi offers a marina as well as plentiful accommodations in all price ranges. Restaurants on the top of Güvendik hill afford a marvelous view of the bay and its islands.

The prosperous little fishing village of Çesmealti is notable for its simple yet excellent fish restaurants to try Turkish cuisine.

As you drive along the panoramic Karaburun peninsula coast road, you pass several peaceful bays and quaint fishing villages, Balikliova, Mordogan and Karaburun. At Karaburun, pleasant hotels, tea gardens and fish restaurants sit between the beautiful mountain backdrop and the clear, clean water. From Manastir Mountain you can enjoy an unforgettable view of the Karaburun coast, the Foça coastline opposite and the entrance of the Gulf of Izmir. If you are lucky, you can spot Mediterranean Seals swimming in the water.

Gümüldür has good tourist facilities, beautiful beaches, restaurants and hotels. Nearby at Ahmetbeyli (Claros) to the east, stand the Apollon Temple and the remains of the colossal statue of Apollo; here you can also enjoy a good fish meal, try Turkish food or a swim at the town’s wide beach. A winding panoramic coastal road leads from Ahmetbeyli south to Pamucak beach near Kusadasi.

Seferihisar is a quiet town which lately was awarded the status of a “Slow City”, an independent organization in Europe founded in 1999 trying to improve the quality of life in the towns within its network and which promotes a city having less traffic, local food instead of fast food, traditional life and housing, interesting places and unspoiled landscapes. Seferihisar is the first Turkish town to receive this status, and it certainly deserves it.

On the southern side of the Çesme peninsula near the town of Seferihisar is the small picturesque Sigacik. This important yachting center with its modern marina is surrounded by fortifications dating from the Genoese period and is a good point from which to visit the Temple of Dionysus at the antique site of Teos as well as the lovely Akkum beach.

For areas to visit near Cesme visit https://visit-turkey.org/destination/aegean-region/