The city is located on the slope of a hill looking down south to the Mesopotamian plains. Mardin is on the main routes connecting Turkey to Syria and Iraq. According to hearsay, the history of the city dates as far back as the Flood.

The city lived under the rule of the Hurri-Mitani, Hittites, Surs, Babylonians, Persians, Romans, Arabs and the Seljuk Turks. Later, the Mardin branch of the Artuklu Kingdom called “Tabaka Ilgaziyye” was established and the city flourished during this time.

The city used to be known as “Marde” by the Persians, “Mardia” by the Byzantine, “Maridin” by the Arabs and “Merde-Merdo-Merdi” by the Syriac. These were transformed into “Mardin” after the area was occupied by the Turks.

The fortress, Kasimiye Medresse, Zinciriye Medresse and Grand Mosque are important historical sites around the city. Other historical assets in the area worth seeing include Dayrul-Zeferan Monastery and Harizm Medresse. The 15th-century Zeynel Bey Mausoleum nearby is attractively decorated with blue tiles. Dating from 1385, the Sultan Isa Medresse is an interesting, beautiful Turkish monument with its magnificent carved portal. The Kasim Pasa Medresse, is also significant for its dome of beautiful stonework and the Ulu (Grand) Mosque with its well-decorated minaret, is another sightseeing spot.

The best examples of Artutid architecture can be seen at Kiziltepe, 21 kilometers (13 miles) south of Mardin, with the 13th century Ulu Mosque with its fine mihrab relief and beautifully decorated portal.

Dara site is one of the most interesting discoveries of the latest excavations near Mardin. It’s located on the way to Nusaybin near the Syrian border. 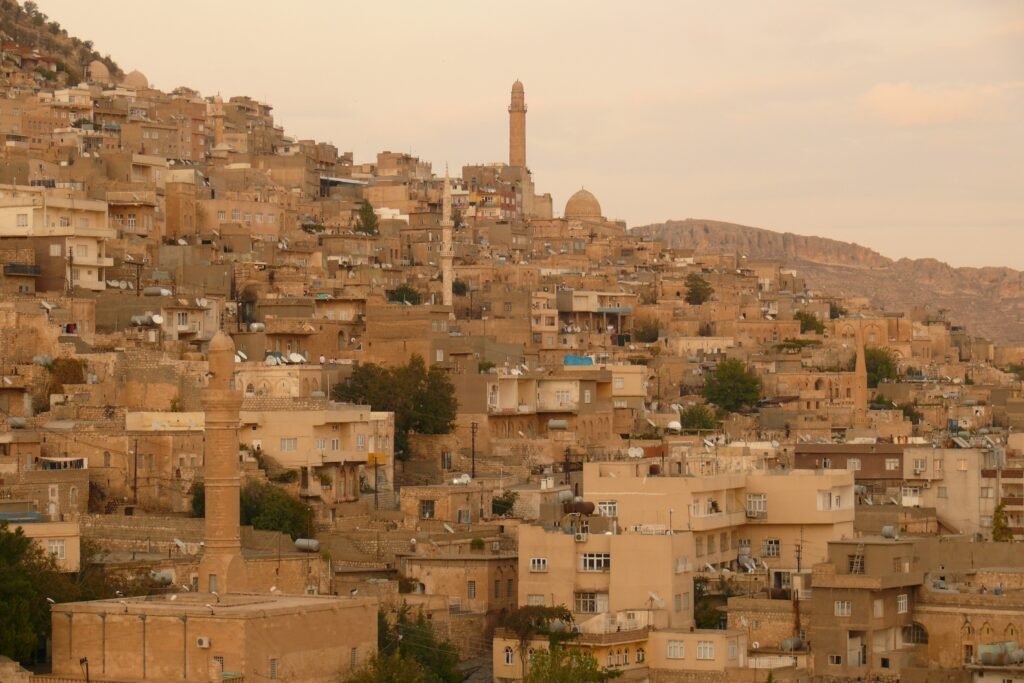 At Hasankeyf which is on the borderline with Batman province, you will see the ruins of the ancient 12th century capital of the Artutids. The bridge which once connected the two parts of the city over the Tigris (Dicle) river and the palace, are others. Hasankeyf will be completely flooded when the nearby dam will be completed, a part of GAP Project.

Deyr’ul Zafaran Monastery is a Syriac monastery 9 kilometers (5,5 miles) to the east of Mardin, built in the 9th century. At present, it is a visit place and a shelter for impoverished Syriacs. The monastery used to be a religious center for the Syriac until 1932. One of the biggest of many monasteries existing in the region, Deyr’ul Zafaran has 52 Syriac Patriarchs buried here. The secret section for worshipping called “mahzen” is the oldest part of the monastery. The monastery was enlarged with additional sections built later. Around the structures which form a trinity with Deyr’ul Zafaran, Church of Virgin Mary and Mar Yakup Monastery, there are three fortresses built for protecting the trinity.

Mar Yakup Monastery derives its name from a priest (Marislium). It was later known as “Marevgan Monastery”. According to a hearsay, Marbinyamin, one of the heralds of the east had the bones of his oldest disciple buried here. The monastery was also known as “Marhonesya” for a time.

The museum is housed in the former patriarchate constructed in 1895 by the Patriarch of Antakya, Ignatios Benham Banni. Now restored to its original condition, the building houses collections dating from 4000 BC up to the present day and representing the Assyrian, Urartian, Hellenistic, Persian, Roman, Byzantine, Seljuk, Artuklu and Ottoman periods. Pottery, seals, cylinder seals, coins, lamps, figurines, teardrop bottles, and jewelry are among the many and fascinating exhibits.

Mardin has preserved the old-style carving in its houses. Since located in a volcanic area, the basic input used in local architecture is easily workable calcareous rock. Houses in Mardin, reflecting all features of a closed-in lifestyle are surrounded by 4 meters high walls and isolated from the street. These walls also provide protection from harsh climatic conditions. 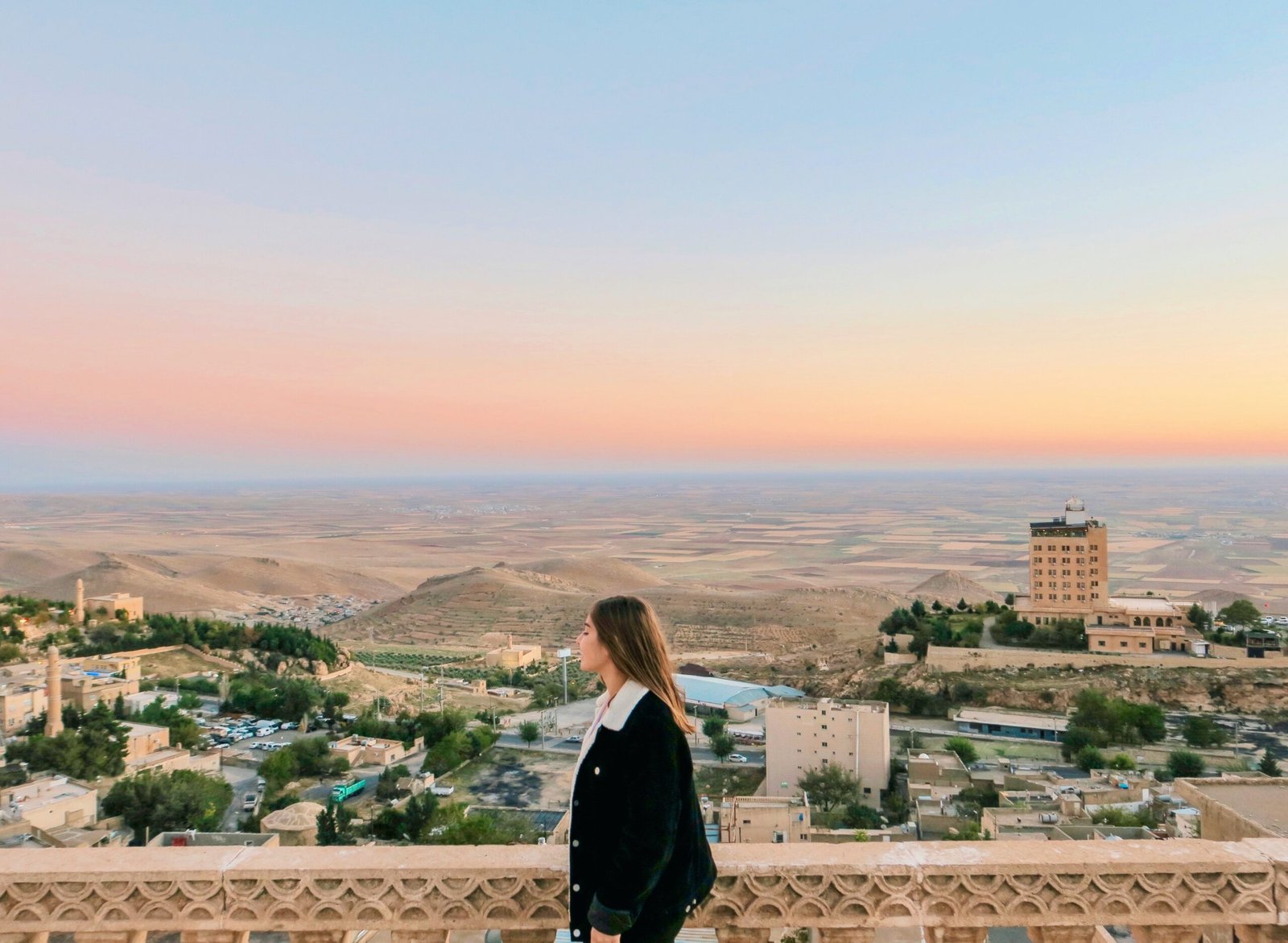 Houses have their separate sections for males and females and mostly have no kitchen. The most important feature of these houses is the stone craftsmanship called “Midyat Work”. Doors, windows and small columns are dressed with arches and various motif. The central settlement was given the status of urban site area in 1979. Above the house, doors are carved pictures of the Ka’ba if the owner has made the pilgrimage to Mecca, and the door knockers have a distinctive form resembling the beaks of birds. Often the lanes run through arched tunnels beneath the upper floors of houses. Relief carvings of animals and fruit lend the city a dream-like character, and the modern world seems to fade away.

Syrian Orthodox gold and silversmiths whose work is famous throughout the country still practice their craft here, their workshops side by side with those of Muslim coppersmiths. Along with the buildings themselves, it is to be hoped that this living culture can also be preserved.

Having a provincial territory of 12,760 square kilometers, Mardin is located in the area where the Southeastern Taurus Range meets the Arabian platform to the south. The area called “Mardin-Midyat Passage” constitutes a large part of the territory of the province. The population of the province is almost 800 thousand (2016). Mardin’s administrative districts are Dargecit, Derik, Kiziltepe, Mazidagi, Midyat, Nusaybin, Omerli, Savur and Yesilli.

After the completion of GAP Project, 100,000 hectares of land are brought under irrigation in Mardin. Newly irrigated areas mainly grow cotton which is processed by enterprises in the Organized Industrial Zone. Besides flour products, fruit processing and seed production, Mardin also processes its local grapes. A part of the phosphorus fertilizers which crop farming needs is provided by the fertilizer industries existing in the province. Agriculture is an important business in the area.

In the past few years, the city is growing very fast, with new constructions all around the suburbs and new residential areas. Besides an organized Industrial Zone, Mardin also has a site for small enterprises that provide employment to local people. Finally, Mardin also has its own Free Trade Zone.

For areas to visit near Mardin visit https://visit-turkey.org/destination/eastern-anatolia/