The old city known as Aintap is located 12 kilometers to the north of the present city, on the upper slopes of Nizip Hill. The area was continuously inhabited starting from the Paleolithic age and witnessed the domination of such powers as the Assyrians, Persians, Romans, the Byzantines, Abbasid and the Seljuk Turks. The times of ascending for the Ottoman Empire meant the same for the city. There are many mosques, inns, baths and medresse built during this time.

The old city known as Aintap is located 12 kilometers to the north of the present city, on the upper slopes of Nizip Hill. The area was continuously inhabited starting from the Paleolithic age and witnessed the domination of such powers as the Assyrians, Persians, Romans, the Byzantines, Abbasid and the Seljuk Turks. The times of ascending for the Ottoman Empire meant the same for the city. There are many mosques, inns, baths and medresse built during this time.

Original builders of Gaziantep Fortress are not known. The fortress was restored by the Byzantines in the 6th century, then again in 1481 during the time of Kayitbay, the Egyptian Sultan, and in 1557 during the Ottoman sultan Suleyman the Magnificent. The fortress was supplemented by watchtowers, mosques and small palaces. There are 36 watchtowers in walls that have a circular shape for 1,200 meters. Mehmet Gazali Tomb, a mosque and a bath exist in the fortress. It is believed there are galleries and paths leading to the river under the fortress. The fortress was an important rampart in resistance against the French during the War of Liberation in 1921.

Hasan Suzer Ethnography Museum building in Hanifioglu street remaining from the early 20th century was restored and transferred to the Ministry of Culture by a businessman named Hasan Suzer. The museum simulates the old style of life by decorating its rooms with traditional furniture and by using models. The museum also includes various weapons, documents, instruments used in the defense of the city as well as photographs of local resistance heroes.

Yesemek Open Air Museum is near Islahiye District, in the village known by the same name. It is the largest open-air sculpture workshop in the Near East. It is a sculpturing school, reflecting all stages from the extraction of stones from the quarry to preliminary carving and to the final work. Investigations in the area reveal that the site was functional around 1375-1335 BC when the area was taken by the Hittites and the Hittite King Suppilulluma started to employ Hurris, the native people of the area in quarries. Excavations unearthed a rich collection consisting of sphinx and sculptures of lions, mountain gods and various architectural pieces. In the past, relieves prepared here were sent to such centers as Islahiye, Zincirli and Sakcagozu for final works and completion. The Yesemek Tumulus is located 2 kilometers to the west of the village. It is believed that it was a settlement inhabited by masters working here during the late Bronze Age and the time of the Romans. 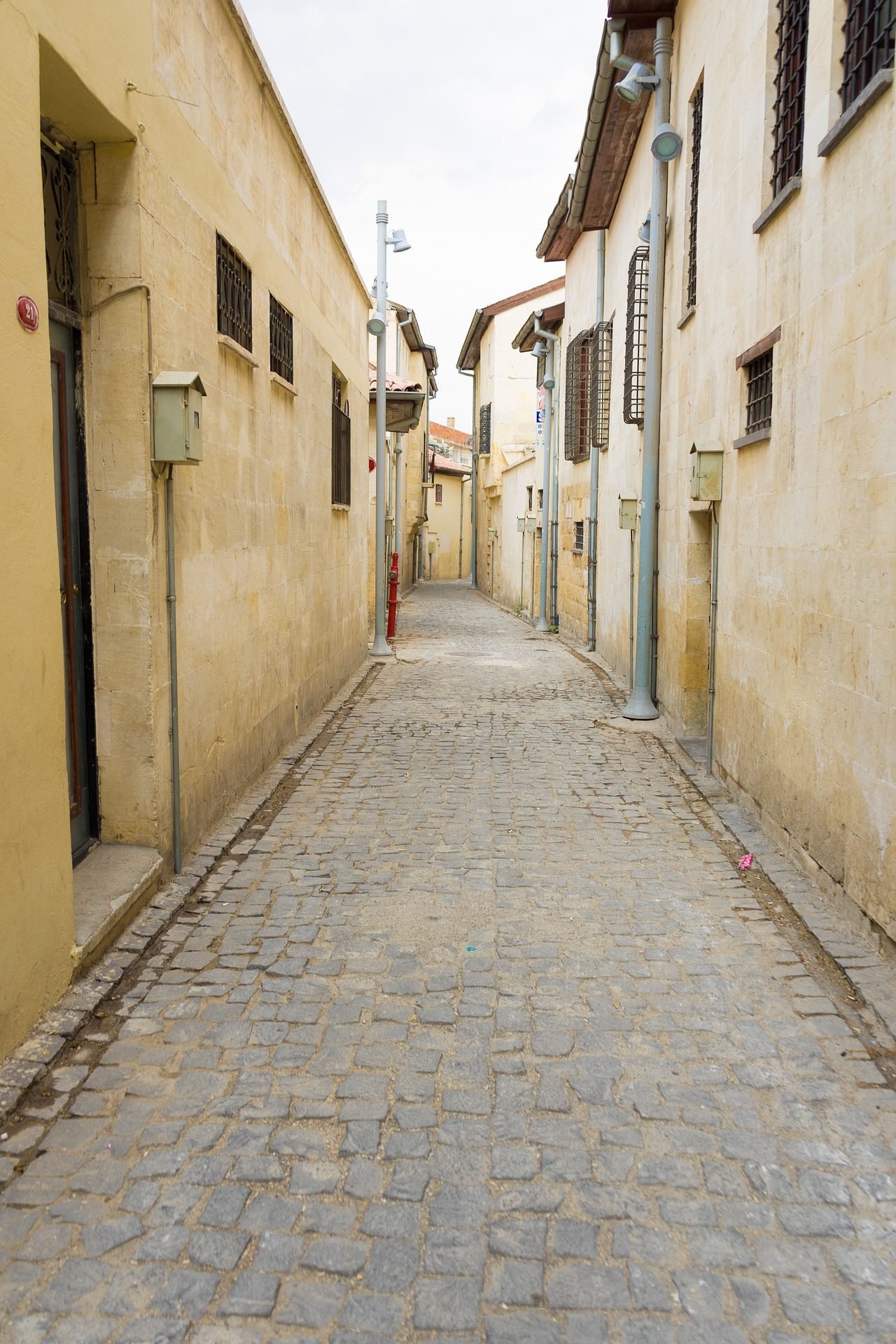 Rumkale settlement is located at the point where Merziman brook joins the Euphrates (Firat) river. It is estimated that the settlement dates back to 840 BC and was built by the Hittites. Rumkale later lived under the domination of the Assyrians, Medians, Persians, Romans and the Arabs. It is said that St. John, one of the 12 apostles of Jesus, tried to spread Christianity in the region by using this settlement as a base. Rumkale is the largest of all fortresses in the area and it has many other remains dating back to various periods in history.

Karkamis district of Gaziantep used to be an important center of the east in the Antiquity (then known as Cerablus). The town is located on the Syrian border, the citadel and the inner town on the west side remaining in Turkey, and the outer fortress and town remaining in Syria.

Being an important center of arts and culture in the past, Karkamis is the setting where the Legend of Gilgamesh took place. Many valuable pieces of art originating from this town is exhibited in museums around the world. At present, one can observe the remains of antic city walls, the temple and Hilani style houses. The temples of Hittite gods Tesup and Hilani maintain their striking features.

The remains of the old city of Belkis (Zeugma) are located in Kavunlu village 10 kilometers away from Nizip district. These remains appear as a tumulus type high acropolis dating back to the Hellenistic, Roman and Byzantine times. The old city is among those which issued a coin in their name. Recent excavations revealed a room that is believed to be a part of an old Roman House as well as a mosaic belonging to Dionysos. Sculptures obtained from these ruins were exhibited at the Belkis/Zeugma part of the Gaziantep Museum. But in June 2005, 2nd largest mosaic museum in the world (1st was the one in Bardo/Tunis) was opened in Gaziantep displaying many pieces of unearthed mosaics and Mars statue from Zeugma. Until this one opened, the mosaics museum in Hatay (Antioch) was the most important one in Turkey. In 2011 Zeugma museum became the largest ancient mosaics indoor museum in the world with other pieces added to the collection.

Dulluk which is close to the city center is ideal for those who would like to rest in a natural setting amidst forest and has camping facilities.

Houses of Gaziantep mostly found in the central town and Sahinbey are the finest specimens of a rich cultural heritage. They have traditional architectural features peculiar to Southeastern Anatolia, Mesopotamia and Syria. The finest examples of the old city fabric can be seen in the area around Hidir and Harap Mescit streets. Built-in conformity with the climate of the area, the houses of Gaziantep are adjacent to each other along the narrow streets of the old city. These stone-built houses surrounded by walls have their inner yards, smooth roofs with dead basements. Doors and window cases present some fine examples of the woodwork.

Gaziantep is famous for its three regional specialties:

The Gaziantep kitchen has a special influence on Turkish cuisine with its immensely rich flavor. In addition to dishes that date back to the Oguz Turks, there is the influence of Aleppo. Its rich kind of soups, rice meals, kebabs, meatballs, etc. are among the most favorite. Local desserts include baklava, which Gaziantep makes the best in the world, kunefe, burmali kadayif, sari burma, mashed pistachio and milk fat. 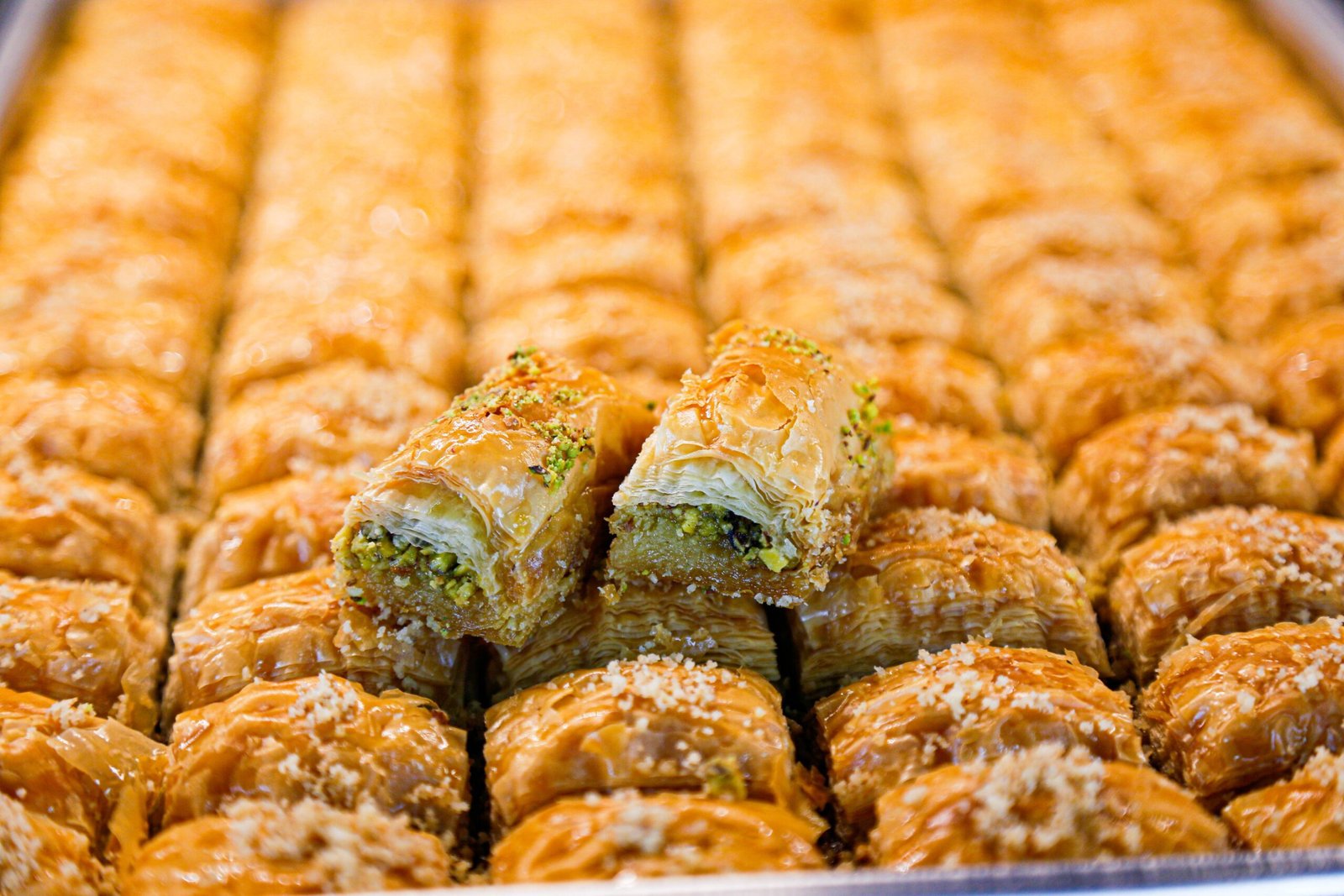 In December 2015, 47 cities from 33 countries around the world joined UNESCO’s “Creative Cities Network”. These cities are selected based on seven creative fields: Crafts and Folk Art, Design, Film, Gastronomy, Literature, Media Arts and Music. The province of Gaziantep has become one of them in the field of “Gastronomy”.

Inns are the symbols of the past economic and commercial richness of Gaziantep. They are still functional today as trade centers. These include Sira Hani, Kumrulu Han, Yeni Han, Kurkcu Hani, Anadolu Hani, Incioglu Hani, Tuz Hani and Haci Omer Hani.

There are two bazaars that could survive to our day and are still used. One of them, Zincirli Bazaar, was built in the 18th century. The bazaar is locally known as the “black steps bazaar” and has 80 shops and five gates. The other bazaar, Kemikli, dates back to the 19th century. It is a cut stone and rectangular structure with two gates.

Gaziantep bore the influence of many civilizations for its location as a crossroad between the east and the west or between the Eastern Mediterranean and the plains of Mesopotamia. Coppersmith works, mother of pearl working, traditional shoemaking, cloth making, stone working, antique weapons, gold and silverworks are the leading traditional handicrafts in Gaziantep.

Gaziantep has a territory of 7,642 square kilometers and a population of a little over 2 million. It is the leading province of the GAP region in terms of population density. It has 9 administrative districts: Sahinbey, Sehitkamil, Araban, Islahiye, Kargamis, Nizip, Oguzeli, Yavuzeli and Nurdagi.

Gaziantep is the most developed city of GAP in agriculture, industry and commerce. It has its pistachio known by the name of the city. Vineyards and olive orchards are also important. Manufacturing activities in Gaziantep are mainly carried out by small scale enterprises. As a vivacious industrial and commercial center, Gaziantep has cement, textile, leather, shoemaking, soap, woodworks, metal and machinery industries and workshops. It maintains its status as an “export gate” by its 120 different products exported to 40 countries.

For areas to visit near Gaziantep visit https://visit-turkey.org/destination/eastern-anatolia/